HOW WAS MARATONA ALZHEIMER BORN?

Maratona Alzheimer was born from an interweaving of ideas, stories, experiences and knowledge.

I first encountered Alzheimer's disease when I was President of an Institution committed to care for the elderly, that is to say the period from the early '90s to Spring 2009, year in which the association turned into an independent entity operating in Mercato Saraceno, the town I live in.

At what was then a Nursing Home, I met Miss. A.F., an attendant suffering from Alzheimer's whose desperate cry - every moment of the day - used to remind us her presence as an individual. Then I saw my maths teacher - whose early retirement, at first, seemed incomprehensible to me, since she really loved her job - incessantly wandering from one place to another, maybe looking for something or someone. I also met lots and lots of patients and families struggling against social stigma and isolation because of the uncontrolled behaviours resulting from the disease.

On this basis, a long journey - intended to give back dignity and wellness to people whose memory has begun deteriorating because of Alzheimers'- has started. People suffering from Alzheimer's gradually loose their identity and connection to the world; both id and universe are, in fact, constructions of our memory, as Umberto Galimberti explains “our memory is a map that establishes who and where we are". Our route is aimed at overcoming incomprehensions resulting from the disease dramatic consequences, by raising a new type of sensibility and - thus - providing a concrete help.

Initially, I suggested to Amici di Casa Insieme - a voluntary association, witness and custodian of first Alzheimer's experiences over the area sorrounding Cesena - to realise a big supportive sport event - that is "Maratona Alzheimer" - made up of some races and walks - to be held in proximity of the International Alzheimer's Day - starting from Romagna's hills and reaching - in the following order - Mercato Saraceno, Cesena, Cesenatico and, thus, the sea, symbolizing hope. Such an approach to the disease represents something totally new: in fact, it is based on socialisation, in order to supply the fields of prevention, assistance and research with tangible innovation.

The idea that lies behind the project comes from the convinction that marathoners and people suffering from Alzheimer's have something in common: patients use to walk without a specific destination, wandering and looking for a place to restore; viceversa, marathoners and walkers use to find their wellness in a more conscious way, that is through the race itself and by exploring new itineraries and cities. Thus, in 2009, I decided to start walking and running and, this year, for the first time, I am attending the 42-km competition! The same impulse that motivated me, then, leaded to the conception of a supportive marathon, that - since 2012 - has been realising every year, thanks to a network made of hundreds of volunteers, dozens of associations and Amici di Casa Insieme's staff.

Our objectives have been outlined over time, up to relating all "Maratona Alzheimer" donations to Fondo Alzheimer 360°, for prevention, assistance and research. The fund - open to donations intended to achieve goals shared by Alzheimer's Universe as a whole - operates in order to provide continuity to the engagement ultimately represented by September's Marathon. The fund is (and will be) fostered and sustained by people, supportive runners, associations and companies that - through the years - are shaping  a recognisable community committed to the greater good and responsible for present and future generations. 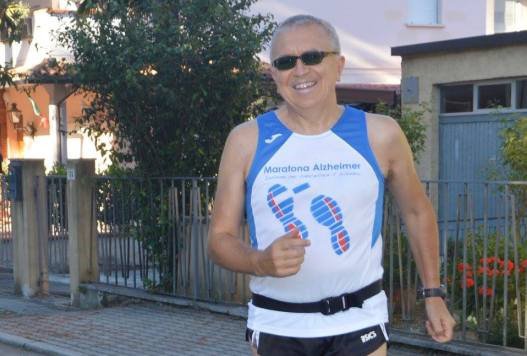