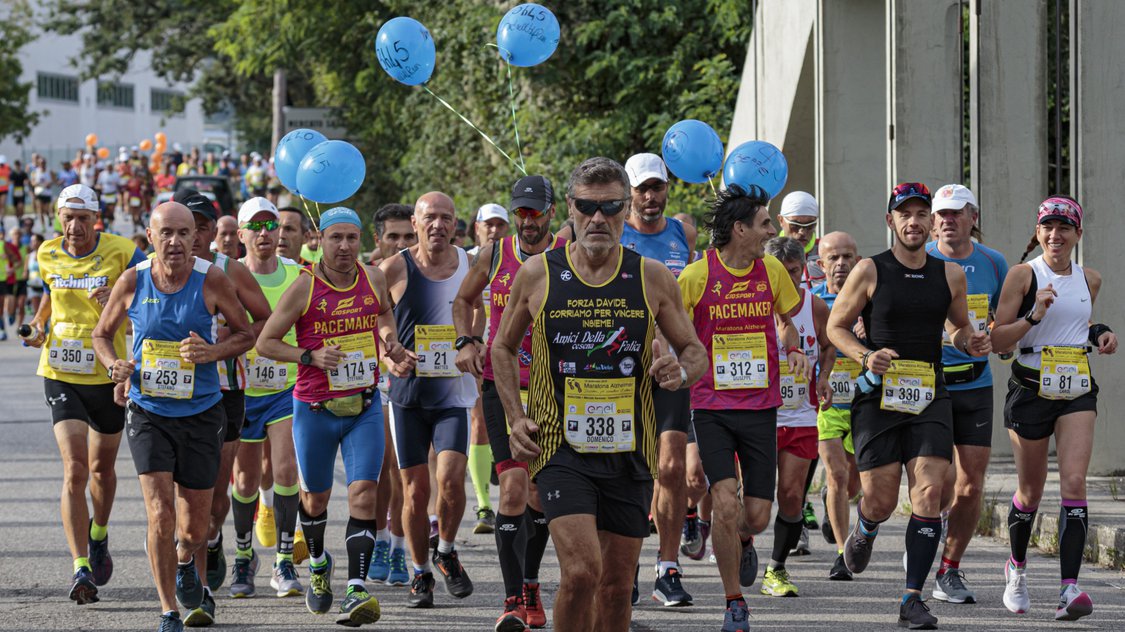 Fidal's marathon - that from Romagna's hills reaches Cesenatico's seaside - covers a linear path that offers exciting landscapes and passes through several tipical small towns, before entering Cesena from its Piazza del Popolo and running past the historical Malatestiana Library (part of the UNESCO's Memory of the World Programme), Cesena Cathedral and Cesena's Stadium. Then, the marathon continues toward the sea, crossing the countryside and arriving at Cesenatico's Parco di Levante.

One of the most peculiar features of the event is represented by the fact that the competition registration includes an 10€ donation destined to Fondo Alzheimer 360°, for assistance, prevention and research against the disease.

Participation fees - including the shuttle bus (by reservation), Runner's kit, a chip, a race bib and refreshments and health services along the route - are:

The Bib numbers will be assigned in chronologically automatically at the time of registration and it will be indicated in the confirmation email that will arrive by Friday 11 September  . The race number is personal and can  not be sold or traded, or used for competitions other than that to which it is registered. It must be attached on the chest with four pins in such a way as to be completelly visible: it can not be folder and must remain intact until the end of the competition. The participant who is on sections of the course not corresponding to his race number will be considered out of the race and without any insurance coverage or assistance from the organization.

At the time of the race bib collection, the athletes in good standing in the foreseen modalities must present the confirmation letter (sent via email at the end of registration and still available here) and a valid identity document, who will have the suspended registration must deliver the card and, the non-Fidal members, also the competitive medical certificate proving the fitness for athletics. Delivery to groups and / or sports clubs is not foreseen except with advance notice. To collect bibs of other athletes, a copy of their identity card must be shown.

MARATHON (awards ceremony scheduled at 13.00 - show up at 12.45 at the stage for the collection of awards)

The first 3 of each category will be awarded with prizes in kind.

N.B. The first ten absolute are excluded from the category prizes.

The recommended parking for those arriving by car is the one in Via Luigi Einaudi, 7 in Mercato Saraceno.

It is possible to change at the changing rooms of the Sports Center, then we will move on foot, accompanied by the Banda di Sarsina at the starting point in Viale Roma. 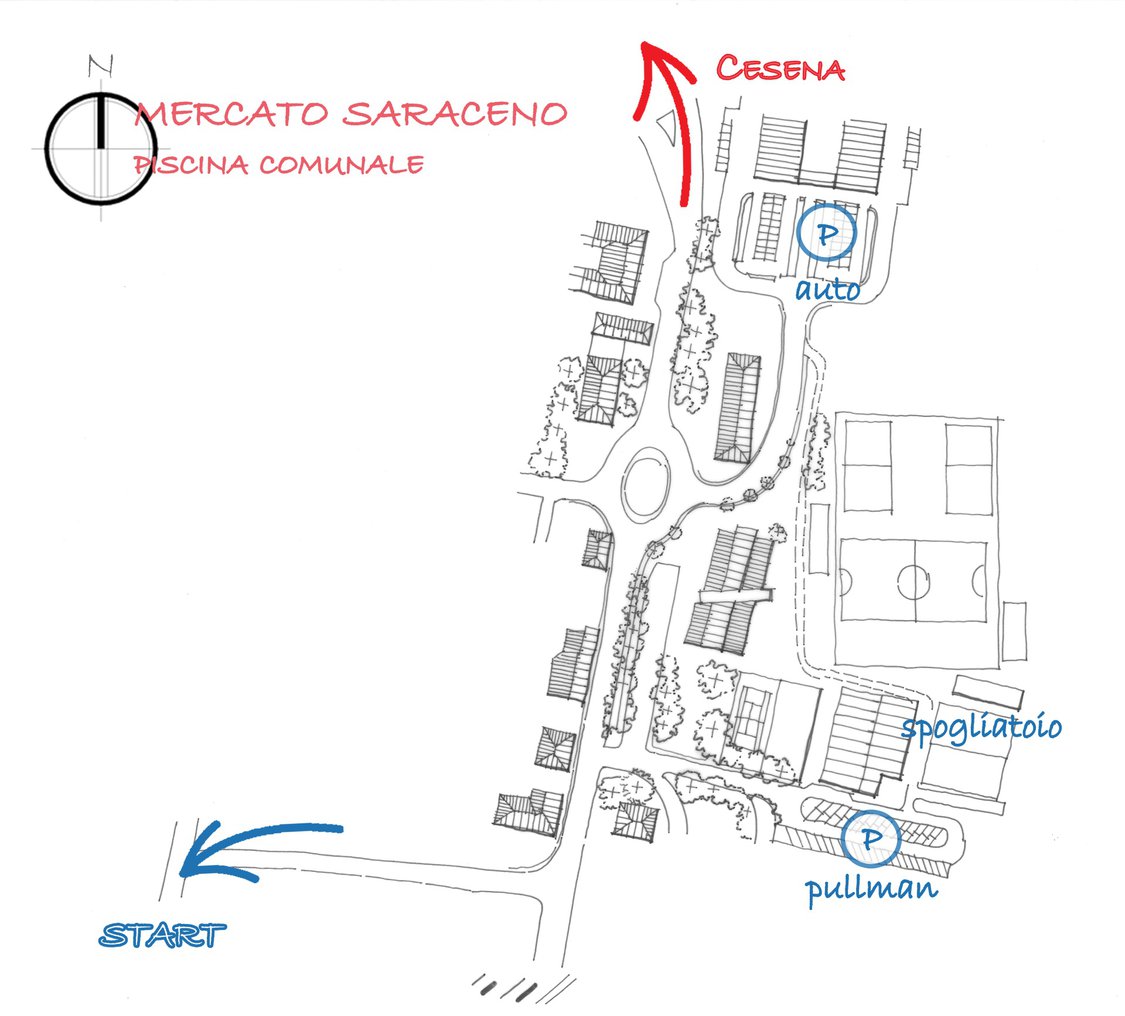 The organization makes available to athletes registered for the races, only upon request at the time of registration, the shuttle service from Cesenatico to Mercato Saraceno, with departures before the race or after the race.

The departure of the shuttles is in Piazzale Donatori degli Organi, next to the Cesenatico swimming pool; the transport times for the Marathon are:

The departure of the post-race shuttles is in Via dei Mille, towards Cesenatico (exit behind the park towards the sea).

It will be possible to make a change in the shuttle request only by closing the registrations on Wednesday 9/09/2020. Any further changes must be made based on the availability of the seats left on Saturday 12/09/2020 at the bib collection stand at the Levante Park in Cesenatico.

The athletes before accessing the pullman show the volunteers the nominal ticket that they will receive by Friday 11/09/2020 via email. Before boarding the bus, it is advisable to check the sign indicating the place of destination.

Departure from Mercato Saraceno. Many people ask themselves whether Saracens actually passed through the town. The name clearly comes from "market", as during the XII century, before Internet and E-bay were invented, people used to meet in specific places in order to sell and/or buy goods.

Anyway, for what concerns "Saraceno", the first certain news date back to a document written in 1223 in which a place named “Forum Saraceni” is mentioned. "Forum Saraceni" was so called because of its belonging to a certain Saraceno, son of Alberico degli Onesti, an ancient local squire.

Therefore, there are no muslim influences involved. If you have enough time, you should have a walk through piazza Mazzini, in the historic centre: quite small but really graceful and with a lot of bars in which you can have a coffee, it represents the main square of the town.

Descending towards Cesena, then, you will pass through some little villages situated along the old road that leaded to Rome, before E45 was built. The route is really pleasant: it offers a great view over the hills and presents some slight latches and a wavy path.

Entering Cesena, the first thing you will notice is the Rocca Malatestiana, placed over the Garampo Hill. The construction of the fortress began in1380 and finished in 1477 (under the pope dominion).

The place in which the castle rises was the area over which the original Cesena's residential zone was settled before the Roman colony was established and where Romans, once defeated Celtic and Etruscal populations, built their village.

Very little remains of the Roman and pre-Roman Cesena since, in February 1377, the future pope Clemente VII, in order to punish the town for having supported the Republic of Florence, sent there his "Breton" troops. Narrators of that time report 4.000 dead people and the same amount of deported ones among the civilian population; the town was completely destroyed.

I would not like to dwell too much but I point out that the Malatestiana Library certainly represented, for the city, a sign of rebirth. Built around 1450 by Malatesta Novello, it has remained intact, exactly as it was at the moment of its construction. It is, actually, like a time machine, as crossing its doorstep means going back to over 500 years ago. The marathon does not pass in front of the Malastiana Library and, anyway, it would not be possible to enter it but, if you have a little bit of time, you should go and see it. The 5-euro entrance fee is absolutely worthwhile; moreover, on the inside, you can see the elephant symbol, emblem of the Malatesta family and one of the icons of Cesena itself.

Getting back to our itinerary, when crossing the main Cesena's square, piazza del Popolo, in front of the Albornoz palace, don't forget to have a look at the Masini fountain, whose water jets have been flowing since 1591.

Once out of Cesena, we will run along a stream called Pisciatello. The name helps us figuring the amount of water that, nowadays, flows in it and yet, it represents a possible path of the Rubicon.

Since always, the exact Cesena's passage point, associated with the famous expression "Alea Iacta Est" dividing academics, is discussed. The most accredited options are: the Rubicon (crossing Savignano and once called Fiumicino), the Uso (passing through Santarcangelo) and the Pisciatello (Urgon, in dialect).

Mussolini, as a true Duce, established that the Fiumicino was "the Rubicon", but a lot of historicians disagree with that.

Just recently, a public event in the form of a trial with some academics has occured, in order to determine which one is "the real Rubicon". The jury decided that the Pisciatello is "the true Rubicon", that is to say that we will run beside the river where, on 10th Jenuary 1949, Julius Caesar started his war against the Roman Senate.

Skirting the torrent, we will reach Cesenatico. This place too was already peopled before the Roman invasion; anyway, Romans permanently took up residence there. Thus, the town is deeply attached to its harbour, but it will not be possible to see it during the marathon as, since 1314, prosperity periods and difficulties ones define its alternating fate.

A really interesting peculiarity is represented by the fact that the present harbour still traces the lines drawed in 1502 by Leonardo da Vinci, upon Cesare Borgia request, in order to improve the pre-existing landing.